During his interview for Salute American Vodka, Ryan Dunne was stunned to see a former colleague’s story featured on a bottleneck hanger. Sgt. Mike Pereira was one of seven other men with whom Dunne shared living quarters when serving overseas in the United States Army nearly ten years ago. Sgt. Pereira received a laptop from one of Salute American Vodka’s charity partners, Work Vessels for Vets, Inc., to further his education and pursue a career as a mental health counselor for veterans in honor of friends and colleagues lost to veteran suicide. In this moment, Dunne saw the Salute American Vodka mission to financially support organizations that help veterans and other American heroes through the sale of high-quality, American-made craft spirits at work. He immediately accepted the position of Salute American Vodka veteran ambassador and salesman.

“Numerous charities exist that work to help the veteran community in some capacity, however Salute American Vodka’s dedication and attention to detail is different” says Dunne. “The company goes above and beyond to partner with organizations that work with veterans to not only meet their immediate needs but to also see their success through.” 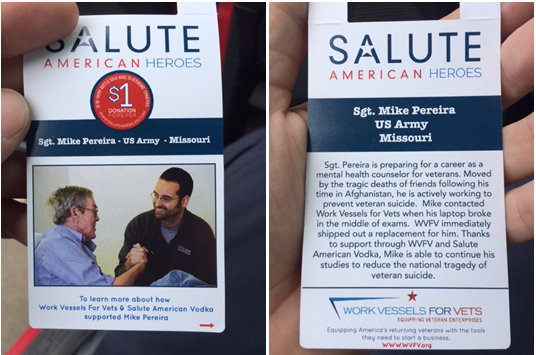 Salute American Vodka is a reason Work Vessels for Vets, a Connecticut nonprofit organization that equips America’s returning veterans with the tools they need to start a business or pursue career education or training, is able to assist veterans like Sgt. Pereira.

In joining Salute, Dunne will be working with one of his personal heroes who also serves as a veteran ambassador for the brand, Lieutenant General Ray Palumbo, the retired three-star Army general who provides counsel to Salute American Vodka’s leadership and helps connect the company with veteran communities. Dunne was an obvious choice to add to the team as he is a true American hero. The 33-year-old veteran and cancer survivor represents many of the company’s values: loyalty, resilience, compassion and authenticity.

Inspired to enlist by his paternal grandparents who served in World War II, Dunne worked from 2004 to 2008 as an intelligence analyst in the United States Army. During this time, he trained at several bases across the southeast and graduated from the Intelligence School at Fort Huachuca in the top 10 of his class. He was ultimately stationed at Fort Gordon, located just outside of Augusta, Ga., and served one eight-month tour in Afghanistan as part of Operation Enduring Freedom.

Following his service, Dunne struggled to transition from military to civilian life. He missed the structure, loyalty and camaraderie of the Army. Initially, he settled in Florida where he attended culinary school. One year later, he moved to Arizona to pursue a degree in electrical engineering at NCC and Arizona State University.  Dunne was finally on a path to start the next chapter of his life until he received life-altering news.

Just two years into the program, Dunne’s education was cut short when he experienced severe flu like symptoms. A biopsy revealed he had cancer. Dunne was immediately transported to the Veterans Administration Hospital in West Haven, Conn. and then admitted to Smilow Cancer Hospital at Yale-New Haven where he was diagnosed with acute undifferentiated leukemia. He underwent a year and a half of intense chemotherapy treatments, followed by a bone marrow transplant. Today, he is two years cancer free.

“Like everyone else, I have overcome obstacles throughout my life, but each time I learn and grow from those experiences,” says Dunne. “Salute American Vodka has been so welcoming. I am grateful to be part of the team and for the opportunity to help other veterans across the country.”

On a daily basis, Dunne works one-on-one with retailers and distributors to help build the brand’s charitable impact through sales. He is an integral part of Salute American Vodka’s grassroots efforts to grow the company, one bottle, one city, one state at a time. And, most importantly, he is an advocate for the veteran community.