Tim Smith, 38, grew up playing sports in his hometown of St. Louis and spent two years playing college basketball at Forest Park Community College. Smith missed the camaraderie that came with playing on a sports team. This yearning to be part of something bigger, combined with his desire to serve his country, lead Smith to join the army in January 2003. 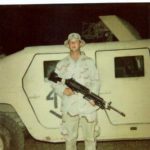 In January 2004, Smith was deployed to Baghdad, working on security and transportation and as a guard. After serving four months in the capital, Smith traveled to Mummiydah, Iraq, a rural area outside of Fallujah. On April 29, eight of Smith’s comrades were killed in action by a vehicle-borne improvised explosive device (VBIED). Smith was getting off guard duty and it hit him like a pile of rocks.

“It took me a while to work through it,” Smith said. “It was really difficult. I served with these guys who had given everything for their country. It took me a few days to realize how fortunate I was to be okay.”

In 2007 after being honorably discharged, Smith was diagnosed with post-traumatic stress disorder, or PTSD. Sadly, this is not uncommon for servicemembers and veterans: between 11-20 percent of soldiers who served in Operations Iraqi Freedom and Enduring Freedom suffer from PTSD.

“I had too much free time to think about what happened over there,” Smith says. “I found that staying busy helped me with managing the symptoms.”

At the time, Smith was plenty busy while studying at Washington University in St. Louis. He was pursuing his Master of Social Work degree at the George Warren Brown School of Social Work as a Tillman Scholar. While in class in 2010, he came up with a business idea: he would start a cleaning company that would hire veterans and their families, helping them earn money while working at night.

Over the course of five months, Smith put all of his energy into crafting a polished business plan to launch Patriot Cleaning Company from dream to reality. “My main objective was to hire veterans and their families to clean commercial office space,” he said. “It would enable the veterans to be a part of a team again.”

However, Smith found himself experiencing the obstacles faced by many new business owners: unexpected costs and a lack of funding to handle them. That’s where Work Vessels for Veterans, Inc., a Connecticut-based nonprofit organization, swooped in to help.

Work Vessels for Vets, Inc. equips America’s returning veterans with the tools they need to start a business or pursue career education. Since its founding in 2008, Work Vessels for Veterans has donated more than $1.6 million worth of equipment to more than 1,600 veteran-owned businesses across the country. The organization works closely with these businesses through mentorship programs to ensure that each company continues to grow and thrive over time.  Learn more about them at www.WorkVesselsForVeterans.org

“I was really bootstrapping the business at the beginning. Then, Work Vessels for Veterans donated a van, cleaning equipment, and covered the cost of insurance for the company. I wouldn’t have been able to been able to afford this if it hadn’t been for them,” he said.

Not only did Work Vessels for Veterans donate supplies and the capital required for Smith to start his business, the organization also provided priceless guidance, mentorship, and support throughout the process of launching the business.

More than six years after launching Patriot Commercial Cleaning, the company now employs 42 veterans and 11 family members of veterans in Missouri and Illinois. Smith works closely with career centers dedicated to assisting veterans finding jobs. And, he isn’t stopping there; he hopes to expand the business through the Midwest and help more veterans find employment.

“When you’re in the military, you’re constantly being given directions and you know exactly what needs to be done,” Smith says. “But, when you come back from overseas and you’re acclimating to civilian life, you’re totally on your own. Working at a place like Patriot Commercial Cleaning gives veterans a place to collaborate, work together, and feel supported. They give each other guidance in transitioning to their new world.”

Smith is grateful that he is able to give back to the veteran community. “I was able to start a business from nothing, and now I’m able to give back by hiring veterans who served overseas. It really doesn’t get better than that.”