This spring, Salute American Vodka is launching in major cities nationwide. As the brand expands, the high-quality, award-winning, American-made, craft vodka will continue to partner with retailers and distributors to make a difference for individuals and families living in their communities across the country. The first dollar of every bottle sold goes directly to organizations that assist veterans and other American heroes in their pursuit of an education, furthering their careers, starting a business and achieving the American dream.

A native spirit made for and by Americans in a marketplace infiltrated by foreign vodka brands, Salute American Vodka is USA Certified™; the company is creating American jobs through agriculture, manufacturing and sales. From the printing of its labels and its signature red, white and blue military canteen-inspired 750ml bottles, to the spirits inside, Salute American Vodka is 100 percent manufactured and distilled in the United States.

To become USA Certified™, a company must undergo an audit and certification process to prove that all product assembly and American labor comply with all U.S. safety standards and labor laws. When a company displays the USA Certified™ seal on its products, it is guaranteeing that each component from which its product is made is authentically all-American.

The 80-proof vodka is made with corn and wheat grains grown in the Heartland and is distilled four times for a thicker pour and smooth, clean, odorless taste. The vodka is bottled and distilled in Rochester, N.Y. As the brand expands into additional states, look for the Salute American Vodka Hero RV at tastings and events in a city near you. 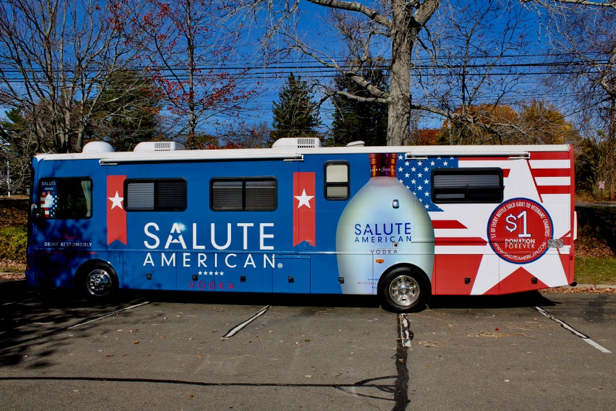 Salute American Vodka was founded in 2012 and officially launched in 2013. In its first month of launching, the company contributed $25,000 to Work Vessels for Veterans to support a veteran starting a blueberry farm in Florida. In June 2016, the brand was acquired by Handcrafted Brands of Branford, Conn. The company aims to become the number one spirit contributor to veterans’ charities nationwide.